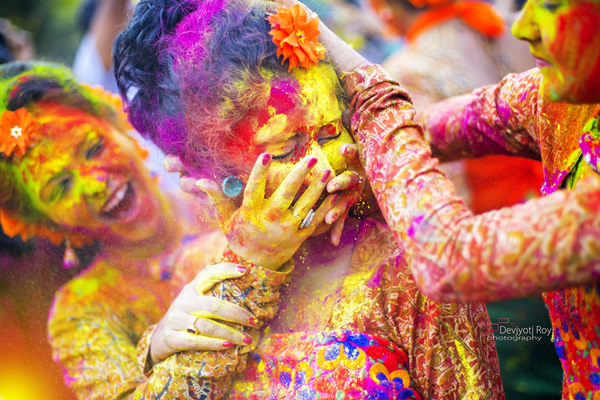 Holi is one of those occasions where India is found the happiest. Known as the festival of colours, it is now celebrated on a worldly scale. It aims to bring the community together and celebrate the triumph of good over evil. It is celebrated over the course of a few days, usually in the second week of March. It embarks the advent of spring, the blooming and rejuvenation (goodness) of the season.

In spite of this, some places celebrate it prior to the official Holi Day. Originally, it is a two-day festival; the bonfire night that marks the beginning of a new season, following is the next day if enjoyment and the actual play of colours, but is celebrated for days at several regions based on their community beliefs. Beginning as a Hindu religious festival, it went on to become popular among non-Hindus in many places such as South Asia, many palaces in North America and Europe in the past few years.

How is it celebrated across the country?

Holi is popularly known as Basant Utsav in rural India. In this festival everybody seems to be the first one to colour the other. Gulal, abir and pichkaris are the most essential elements used. Temples are carefully decorated with the idol of Radha is placed on a swing following the devotees showering the holy place with melodious devotional Holi songs. In modern times, small plays are also organized reflecting the spirit of the festival. What is remarkably similar across the country is the spirit of Holi; the fun, frolic, boisterousness mark the success of the festival of colours.

How is it celebrated in different states of the country?

Udaipur, a city in Rajasthan is a great place to embrace the true spirit of Holi, experiencing it in the most luxurious settings. On the eve of Holi, the conventional Holi festival celebration is grandly celebrated in the form of an elaborate procession of a royal band with decorated horses. Later, a sacred fire is lit with a Holika statue in it ready to get burnt. Folk dances, singing, playing of drums, preparation of cocktails, and setting up an elaborate dinner, lighting up of fireworks is organised by the communities.  It is attended by dignitaries, guests and foreign tourists.

In Barsana, thousands of people celebrate Lath Mar Holi in the Radha Rani temple, when women beat up men with sticks and men protect themselves with shields. The ones on the side-lines are extremely excited while singing Holi songs and chanting / shouting “Sri Krishna”.

The Land Of Holi

In Vrindavan and Mathura, the festival is celebrated with a special puja followed by traditional celebrations to worship Lord Krishna. This includes the tradition of Matki Phod (breaking of the pot) where a pot filled with buttermilk is hung high with a rope in the street. Then group of boys / men form a pyramid by balancing on each other’s backs or shoulders to reach and break the pot with the person’s head that is at the top. While they are at time, women surround them, singing songs and sprinkling coloured water to distract them and make their job harder.

In Goa, the festival is considered as a festival of spring; called shigmo. It is celebrated mostly by the masses following all religious traditions and it is accompanied with fanfare. Performances on drumbeats, epic enactments of mythology are religiously followed with the use of vibrant colours. Shigmotav is highlighted with troupe-performances in the form of parades and cultural dramas. Later into the day, huge effigies are taken in processions and prizes given away.

The festival of Holi is celebrated in a different way in the city of Jaipur, the capital of Rajasthan. The Jaipur Elephant Festival is celebrated annually on the eve of or the day of Holi. It starts with a traditional procession of painted elephants that are adorned with glittering ornaments or embroidered velvets and features elephant beauty contests, elephant polo and elephant dance. However, it has been cancelled since 2012, due to protest from animal rights groups.

As a resident in Mumbai, Holi is a festival that allows you to take a break from the fast-running, hectic life. It features the same tradition of the Matki Phod, as in Vrindavan. The one who breaks the pot is named Holi King of the year. In the ISCON temple, it is celebrated in a traditional way.

These are a few places out of a lot where celebrations vary place to place.